Workshop on Memory of Migration organized by Colours of a Journey

The Colours of a Journey collective has organized a three-day intensive and inspiring event on memories of migration that was held at the University of Groningen.  We have discussed the possibilities for memory of migration -in the context of human mobility- to be visually represented, digitally shared and politically used. 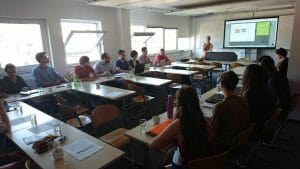 The workshop, titled “Visual Memories of Migration – Colours of a Journey as a Counter-narrative to Europe’s Refugee Crisis”, took place in Groningen (NL) between 14th and 16th of May, 2018. Its aim was to shape a dialogue in which members of the collective and external speakers, researchers and practitioners in the fields of visuality, social media and memory of migration could share and exchange ideas, experiences, impressions, critical views and possibilities for further cooperation for the future.

The first day of the event had a special and some sort of emotional motive: it was the first time for the whole collective of CoJ to physical meeting and discuss, due to the multiple nationalities and localities of its members. On this introductory day, the collective could discuss several technicalities, plans for the coming months, new areas of impact and expectations for the project.

The second day built upon two different panels by external speakers. In the morning panel “Narratives of Migration: Digital Archives and Oral History”. For the CoJ team, Patricia Bachmaier, Tuscany Bell, Martin Bogdan and Lara Ramos Yáñez briefed the audience about the project of Colours of a Journey and held a presentation titled “The Colours of a Journey – Mobility, Memory, Visuality”. This was followed by a speech by Katerina Anastasiou (transform!europe, Vienna) on Autonomy of Migration and the political aspects of inclusion.  Eleni Kyramargiou concluded the morning panel with her talk, titled “From silenced stories to history”. Eleni has shared her experience in research activities with refugees under the National Hellenic Research Foundation. The afternoon panel, titled “Migration, Memory and the Digital Sphere” was enriched by the valuable presence of the following speakers: Shreepali Patel (from Story Lab, UK, “Memory and First Person Multimodal Narratives”), Koel Leurs (Utrecht University, “Young Connected Migrants: Comparing Digital Practices of Young Refugees and Expatriates”), Rik Smith (University of Groningen, “Memory Work in the Platform Society”) and the final lecture on how to design a Digital Project by Spyros Tzortzis and Gregory Tsardanidis (Sociality, Greece).

All the speeches and followed-up discussions were driven by the conviction of the power of visual narratives for the agency of migrants themselves, as a way to overcome the migrant subjectivity as deviant and politically dangerous. In line with this, the Colours of a Journey has gained an opportunity to discuss and reflect on the possibilities to open up the space of action without compromising the valuable first-person narrative of the project. Furthermore, visual representations of migrant experiences enable us to tackle and overcome possible national constrained narratives. We have also discussed the potential of institutions/collaborators as new spaces for future exhibitions. Additionally, several ideas were exchanged on the topic of the circulation and distribution of the material, on the importance of emotionally-driven artwork as part of the political aim of the project and on the ways these emotions of affect, like empathy, love and collective mourning, can be used as universal connectors with the audience, in order to humanize the individual rather than just portraying her or his trauma.

Different limitations and challenges faced by the project itself were also discussed, as the way to manage the political mandate of these children artwork, the usage of the meta-data of the project, the possibilities for including additional filters based on thematic-wised patterns and the necessity of being more creative when translating and sharing the first-person narratives of children in forced migration.

The closure of the second day was conducted by students from the second semester of the MA in Euroculture, who organized a physical exhibition in a former refugee centre in town with most of the pictures from Colours of a Journey archive.

The concluding session took place on the third day of the event. We have discussed the participation of Colours to be included in other symposiums, as the upcoming “Refugee Crisis: Challenges and Opportunities in Creative Practice” (Cambridge, June 20th 2018), our participation after the summer in three different cultural and anti-racist festivals (Balkans Beyond Borders, Sabir and Micar) and our plans to organize a Summer School for next year.

Colours of a Journey collective wants to thank all the participants of the symposium for their valuable presence, feedback and help!