What is “Colours of a Journey”

Against the backdrop of growing political, economic and environmental insecurities, millions are forced to leave their lands and homes. Striving for safety and dignity, many of these people embark upon a dangerous and often life-threatening journey to Europe. Undoubtedly, the thousands of children among them are the most vulnerable ones.

Why did these people leave their homes? What does their life look like now? What kind of a future do they envision for themselves?

These questions should be answered by the newcomers themselves. The newcomers must be given space to voice their experiences and stories. This is the only way we can provide a strong alternative to the current politics of fear, restore conditions for solidarity and trust, and hereby fortify the foundation of our common life in Europe. Children, as the most fragile and sincere witnesses/makers of history, should come first.

Art is a medium that bridges linguistic and cultural barriers. Also, images are often better able to communicate complex experiences and emotions than words. Our primary objective is to create a digital platform (archive) – “Colours of a Journey” – that will host “stories” of refugee and migrant children. The platform is designed to collect and exhibit paintings and illustrations done by children between the ages of 6 to 18 and addresses all kinds of supportive structures (details on “How to Join”).

The children will be asked to visualize and draw their past, present and future. All works will be hosted on the platform. A selection of drawings will be organized into a nomadic exhibition that will travel around Europe. The exhibition will be put online and will be available for download and reproduction for noncommercial purpose. 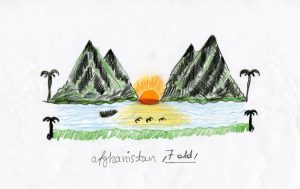 When and how did we move from seeing the right to asylum as a fundamental human right to discussing refuge and refugees as a threat to our identity and public safety? How was the story about seeking refuge from persecution, intimidation, and exile turned to a story of managing, controlling and utilizing the immigration influx? Why was the burden of proof pushed from the ones who should provide help to those who are seeking help? And how did the duty of hospitality become someone else’s problem?

It is beyond obvious that the rhetoric of the “crisis” has divided us into citizens and foreigners and the legals and the illegals. Refuge-seeking is labelled as a threat and criminalized through state policies and practices. Directly against the principles established by the 1951 Refugee Convention or the European Charter of Human Rights, detention, deportation and violent action have been normalized as legitimate measures in the “fight” against migration. And while right-wing populists are reminding citizens of their moral duty to protect “our” values and “our” borders, the repressive apparatus is gaining momentum as the authority that is responsible for and able to remedy the perceived threats. The consequences are devastating. Those that are seeking refuge are de-humanized and made invisible. Being banned from public space and stripped of any political status, these people are either trapped in the politics and economies of immigration detention or pushed into slavery. And while we are getting used to the permanent state of “crisis”, the boundaries of what is normal and what is acceptable have already shifted. A “good” citizen is the one who identifies with, respects, and is willing to sacrifice for whatever is “ours”.  And a “good” government is the one that is willing and able to defend what is “ours”, regardless of the means. Unfortunately, in this scenario, there is very little space for hospitality and solidarity.

It is however a bit less obvious that the “crisis” rhetoric has also enabled mass mobilization of many forms of humanitarianism. The problem is that some forms of humanitarianism have fabricated rather than contested the paternalistic, stereotyping and marginalizing practices towards the migrants. Top-down charitable acts driven by the moral imperative of us welcoming and helping them can affect those that seek refuge negatively. The complexity of the problem becomes reduced to refugees welcome spectacles. Systemic violence and oppression that accompanies migration becomes side-lined and hijacked by calls for various forms of institutional or normative self-empowerment. While we vote in favour of a more human-friendly version of the European asylum system and we march to protect our Europeanness against the illiberalism of different variances of Orbans, Kaczynskis or Le Pens, we become blind to the fact that we are marching vis-à-vis those that seek refuge rather than with them. Again, the consequences are devastating. Again, those who seek refuge are depoliticized, dehumanized and made invisible. And, along the way, we have created a new category of a “suffering subject”, that enables us to place one form of marginality against another and differentiate between those allegeable for hospitality and help and those that are not. Again, the crisis “rhetoric” has shifted the boundaries of what is normal and what is acceptable. A “good” citizen is the one who provides shelter and food to those that deserve it, but ignores poverty and marginality of those that stand outside of this category. And a “good” government is the one that is willing and able to defend those that deserve it, against the poverty and marginality of those that stand outside of this category. Unfortunately, also in this scenario, there is very little space for hospitality and solidarity.

Through this project, we call everyone to stop talking about those that need refuge and to start talking with them. Up to now, the stories of refuge were narrated by you and me – the politician, the policy-maker, the humanitarian aid worker, the researcher, the writer and painter, the news-anchor, etc.. These stories have legitimized us and they have empowered us. We received votes on the basis of our liberal programs, we have received grants for projects that foster tolerance and acceptance of difference, we have published research articles and newspaper articles, we held exhibitions and sold books. We met each other, we talked to each other, we supported each other, we have listened to each other. But, unfortunately, stories that we have created have made those that seek refuge silent and invisible and, against our intention, have enforced rather than challenged the exclusionary discourses and policies.  So, to answer the questions posed at the beginning of this text, a shift from the understanding of asylum as a right to understanding of asylum as a threat took place because the story of refuge has not been told by those that have directly experienced it. For that reason, we need a different narrative; not a narrative for those in need but by them.

We believe that the marginalized, the oppressed, the invisible must be given space to voice their experiences and stories. This is the only way we can create a different narrative that will provide for a strong alternative to the current politics of fear, restore conditions for solidarity and trust, and hereby fortify the foundation of our common life in Europe. We start by proving this space to the newcomer children as the most fragile and sincere witnesses and makers of history. The Colours of a Journey platform is designed to collate and exhibit paintings and illustrations done by newcomer children.  In these paintings, the children have visualized their past, present and most importantly their future.