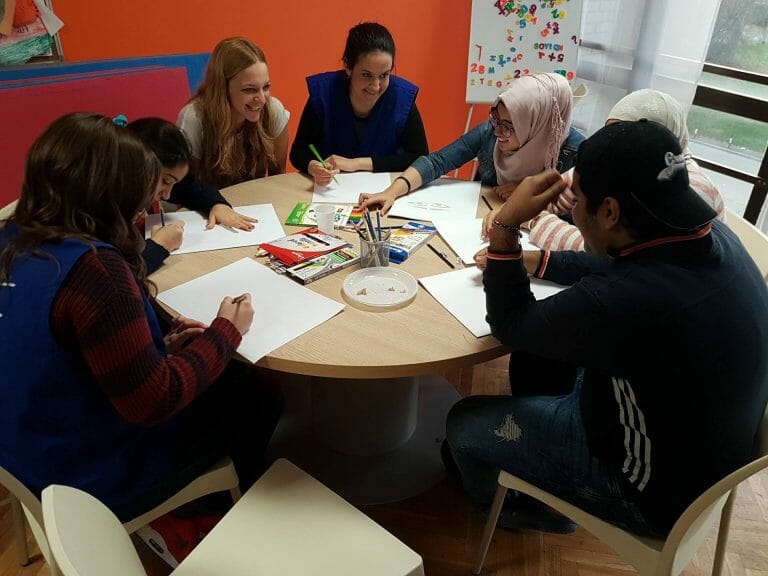 Thanks to the collaboration of Udruga Balkon, an NGO from Zagreb, we can announce that two new workshops and exhibitions are underway in Croatia!

The two workshops took place in the Hotel Porin and in Kutina Reception Centre, on the 2nd and 19th of December, respectively. The artwork done by the refugee children in these workshops has been on display since the 15th of December, in two libraries in the neighbourhood of the Hotel Porin – Dugave and Travno, in Zagreb. Kutina, which is a town 100 km away from Zagreb, will also host a Colours of a Journey exhibition in January 2018.

In total, thirty-six kids participated in these workshops, and their perceptions of their past, present and future can now be seen in our gallery.

On the 2nd of December 2017, Udruga Balkon organized the first Croatian workshop with the refugee children living there. Eleven kids, mostly from Afghanistan, Iraq and Iran, participated in the event. The workshop in Kutina took place on the 19th of December, with a group of twenty-five kids. This reception centre gives shelter mostly to Syrian families, the majority of whom have travelled from Turkey to Croatia. The workshop was organized during their Croatian classes, and the children were really engaged in the task after their Syrian teacher explained the Colours of a Journey project to them. These Croatian language classes were run by the International Organization for Migration (IOM).